Here is a highlight of my most interesting MOCS, which I build in my spare time throughout the years.

Years ago Matthias Richter Designed this beautiful LEGO skull and when I saw it I had to build the rest of it 🙂
Six of these skeletons are siting with visitors in a Kutná Hora restaurant and two are touring LEGO shows across Europe.
Accept for fingers all parts are movable just like a real person thanks to LEGO Technic bricks with ball joints.

As a big fan of this popular game I was inspired to create a few Characters in life-size (child) scale, thought the Enderman is almost as tall as I am 🙂 All together about 50.000 bricks went into this scary display.

Being a huge Fantasy and The Lord of the Rings fan, my very first project in 2010 was a 110.000 piece “minifig” version of Minas Tirith, the City of the Kings from LOTR. This model was build mostly from Light Gray LEGO pieces, which have not been in production since 2003. To make this project happen, I bought and sorted trough around 650,000 used LEGO pieces (650kg) to get the materials I needed. As the entire city on this scale would be close to 8 metres high and wide, I only built the upper 2 levels with the dimensions (240 x 135 x 205cm). It is so strong I can stand on it and guard the city myself 🙂

Winter 2013 was the right time to move on to one of the other passions the little kid in me will have for ever, theme parks and rides. The challenge was to build something capable of motion for long period of time without the need of maintenance.

This model is still running smoothly to this day.

Together with the theme park also came a 235cm high Ferris wheel inspired by the London Eye in UK.

the wheel frame is held by 464 LEGO strings, carries 36 cabins, it is powered by 2 small PF motors. It has been running smoothly since summer 2014 and theoretically can run forever :). I built 2 of these Ferris wheels and its almost identical brother can be seen at the permanent Czech Repubrick LEGO event in Hamleys toy store in Prague. 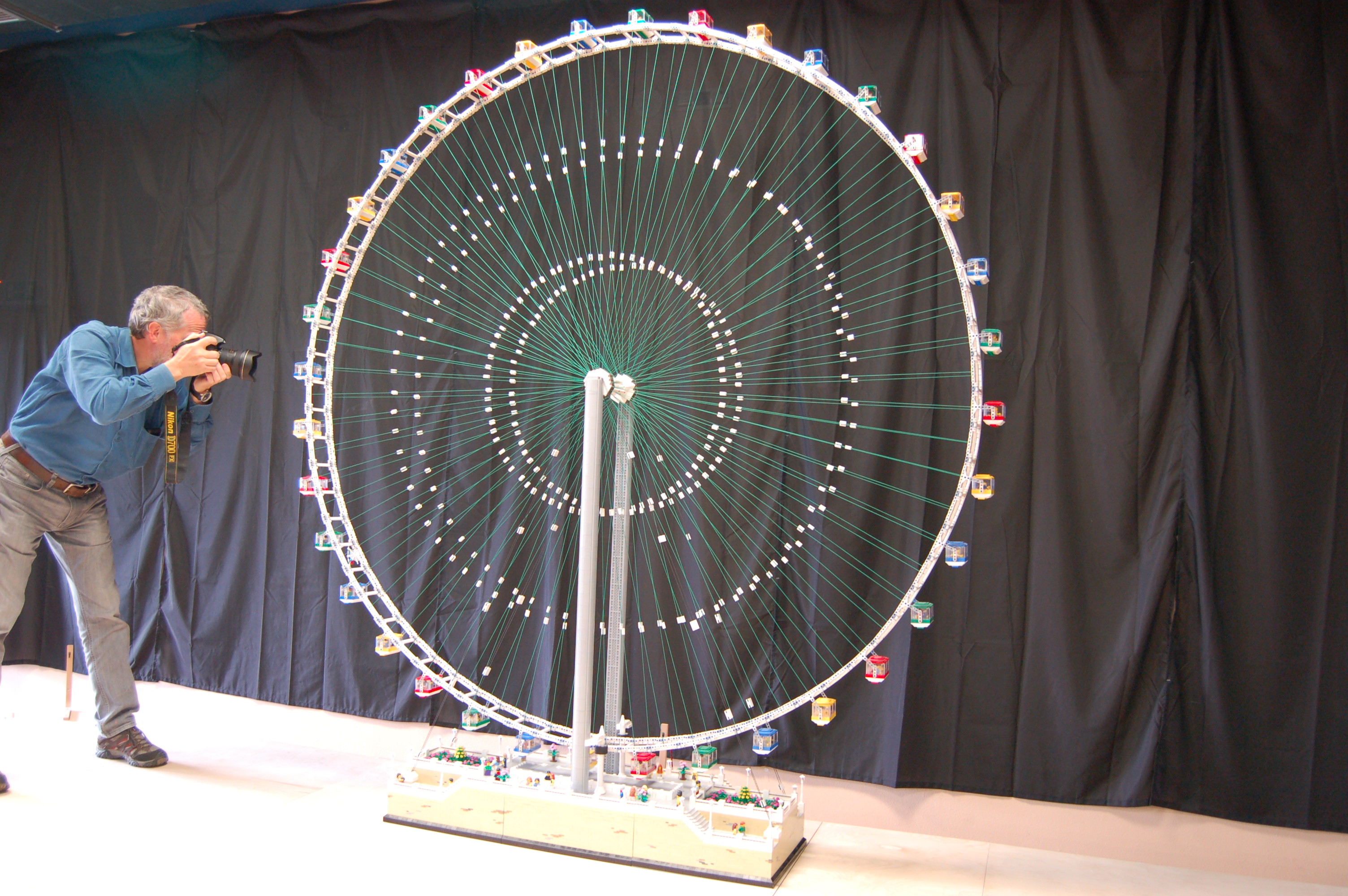 This 365cm high award-winning model is the largest LEGO Ferris wheel in the world. It was constructed for the LEGO group as a centerpiece at the Prague LEGO festival in summer 2015. Since then it WOWs the public all across Europe. The 10 metres long frame holds 43 cabins and is supported by almost a 1000 LEGO strings.

In case you are wondering, this is still not the limit of this building technique. Just like its predecessor it is fully functional and easy to transport.

2016 and 2017 were another great years of pushing the boundaries of what can be built from LEGO and it was the right time for a Roller Coaster. Even though it is a prototype, with 6,5 metres long base and 26 metres of track it is the largest working LEGO coaster in the world. The inspiration for this model was El Toro Roller coaster from Six Flags Great Adventure.

If you want to see it live in action, visit the Czech Repubrick LEGO event in Hamleys toy store in Prague.

Check out the POV ride from the front seat of the coaster and see what it feels like being a  minifigure riding the coaster at incredible speeds.

Since one Roller Coaster is never enough and I wanted one to to be able to take to shows, I also built a White Cyclone Roller Coaster inspired by the Coney Island, NJ Cyclone. This smaller coaster is made out of 25.000 pieces and the 4 metres long panel has joyful 13 metres of track.

Not a big project, but one pulling on the heart strings.

Basically this is what happens when true AFOLs get bored at a LEGO festival. It does happen, rarely, but with great results 🙂

There was a lonely wooden Telephone Booth standing in the middle of a red Brick pit. With plenty of free time and nothing to do, “someone” had the bright idea to build this lonely creature a companion.

Three AFOLs and one afternoon later, two thirds of the booth were done and big thanks to the visitors and LEGO employees, who finished it few days later 🙂

Lit from the inside by a LED strip these sculptures look like they have been carved from Ice.

Sculptures are built from transparent 1×2 bricks and it takes about 20.000 of them to create a human size sculpture.

Krakonoš or Rýbrcoul (Rübezahl in German, Liczyrzepa in Polish) is a mythical spirit of the mountains, which in various forms protects the entire Krkonoše Mountains from greedy treasure hunters, poachers and other relentless people.

The inspiration for this model was the krakonoš, as portrayed by actor František Peterka in Krkonoše fairy tales.

The model has nearly 40,000 parts and was designed for taking photos, it is my first coloured sculpture.